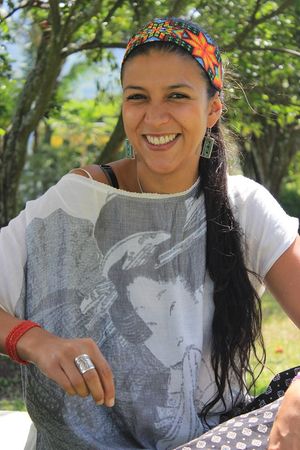 SAJEEVA is Colombian, she created the Women's Healing System and Ovarian Breathing, Female Alchemy. She has lived and traveled in more than 26 countries, studying and sharing her knowledge since young age working today with more than 6000 women worldwide.

Guided by her intuition and the desire to understand and learn more about herself and the mysteries of nature, she studied and got a degree in Traditional Chinese Medicine in Barcelona. This experience and knowledge led her to a desire of getting involved deeper in this culture and the Taoist Alchemy. This is when she moved to China and settled in the city of Nanjing, where she specialized in Feminine Pathologies, while instructing healing workshops through dance and women's movement.

Her own process as a woman and wife took her to enter the world of the psyche and spirit. That was how she began her travels to India where she lived for a period of time with the Sadhus of Varanasi from whom she received the tantric teachings, a wonderful experience that changed her life and her vision of sexuality and love.

It was also in India where she found her master Osho, who despite of having left his body, he has been present in her life and has guided her path. Inspired by his teachings and his vision, she began with the development of Ovarian Breathing, Female Alchemy system. In order to accomplish this, she pursued further in her studies and spiritual practices and moved to Vietnam to specialize in Emotional Somatization works, Degenerative Pathologies and Meditation.

Since early age, Sajeeva has been fascinated with Eastern cultures, this is why she entered the world of Arabic dance as part of her investigation on the female psyche and archetypes. She danced for 10 years in different scenarios of the world, including Egypt, bringing her message of the women as sacred and the female body as a vehicle of love and life with her technique Living Uterus.

She has lived for long periods in India, Spain and Argentina, were she spends her time between seeing patients, imparting her teachings and illuminating thousands of female hearts, guiding them towards healing their body to become a tool to heal their soul.

In the process of fertility, she proposes a method of enlightenment and healing of the body and soul with both the mother and father, as conscious preparation to be givers and carriers of life.

Sajeeva proposes an approach based on works with the body, art, celebration and dance, as a way of understanding more complex levels such as the mind, emotions and spirit.